This story begins 9,000 years before Proto Genesis, before the Dark Dreamer woke up from his slumber.

In the farthest reaches of time and space there lived a Black hole. As with her counterpart in the story Proto Genesis, she was alone for such a long time. She was sleeping but she would have terrifying and horrible nightmares. When she wasn't having nightmares she would dream wonderful dreams at times lucid dreams even, so real it was almost like she was awake. Constantly she was dreaming and waking then falling back to sleep and dreaming and waking. One fateful moment (since days didn't even exist at the time) she had a nightmare. At first it felt like a pleasant dream. There was soft soothing music playing, enough to put monsters of olden age to slumber. Suddenly in her dream there was a low BOOM and her vision in her dream gradually started to grow dark. And then she felt as if she was being sucked into a never ending portal, an endless void full of dark energy of suffering, sadness, and gloom. At first she didn't know what to do, all she wanted was to escape the dark and morbid hole that she was being sucked in. It felt as if her existence was about to be extinguished.

Suddenly she heard a sound. The first sound she ever heard. The sound was a scream. It sounded like iiiiiiiiiiiIIIIIIIIIIIAAAAAAAAAAAAAAHHHHHHHHHHH!!!!!!!!!! And then she woke up.

I-ah. That was the sound that woke her up. That was the very first sound in existence. It was that sound that saved her from her nightmare. She wondered where this sound came from but more importantly she wasn't sleeping anymore. She was awake. And she was filled with wonder and astonishment at this wakefulness. She wanted to know if she can find the source of this sound that saved her from doom.

On the other side of the universe the Dark Dreamer fell into a deep slumber after screaming in pain from all his thoughts.

Now it was this being's turn to think. 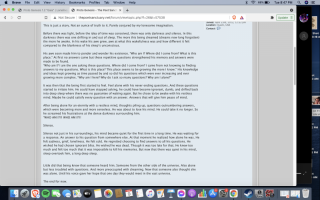 Proto Geneis 2.0 "Iaveh and the realm of his Dark Dreams"

I've always wondered if I was drugged...