Possible solutions for problems in ourselves and the world

The most important question first: Is there good and evil? My answer is yes, there is. I would describe it logically as good: “Decision working/ok for everybody”. Evil: “Decision not working/ok for everybody”. While you should be aware, that opposition does not mean its evil. Maybe a decision is still right with opposition. You can fight for it peacefully. The point is, what is right, logically. What could logically work, with the right results, and the right way. Of course there is space in between good and evil.
The guidelines are being created with the goal in mind, to try to find the best solution for the best result AND the best way to it. Without making trouble. With the mind absolutely set that it has to improve EVERYBODYS life – that it has to be fair to everybody, that everybody can agree that its really an improvement in the end.
I'll always only give hints to that direction, how this goal could be met, I won't force anything.
The basic Principe is [size=small]“Believe, no egoism – objectivity, reasonability, truth, appreciation”[/size]
Everything else is based on that. Since the guidelines can't cover everything, you should most of all try to build this base up. When I say 100% objectivity is not possible, 99% may be.
This is an ongoing process, and the guidelines can still have “unoptimized parts”. Also some things may develop further eventually. What's important is the the basics and being able to use them. The guidelines should absolutely not stop you from thinking yourself what's best (for everybody) and search own solutions. Everybody can make suggestions and talk about it.
What does the “best for everybody” even mean? Basically nobody should be given up, and everybody should be doing well, based on how much good they contribute to society (if somehow possible for them). It should be viewed with long-term effects if possible.
There's a danger of overdoing some things, of passing some goals and going to far. A healthy mediocrity can often be good/reasonable.
When making the guidelines, there's a danger to generalizing to much. Maybe one thing is a bigger problem for one person, and less for another person?
Also when “evolving your mind” don't set the scale on others that you set on yourself. Go easy on others in a reasonable way.
These guidelines are meant to give life structure, to lead into a positive balance without force.
The five basic principles are the most important things as a positive base to do develop a good world in my opinion. And what's the biggest problem countering it? “Manipulation” in my opinion. This can be fought by “opening up”. Nowadays manipulation is everywhere. Just look at the news. But it's getting better I think. Please differ “manipulation” and “influence”. The difference with “influence” is, that the recipient has a real choice if he wants to take the influence in. “Manipulation” especially with “lies” change the person without knowing it. Eventually not to the better.


About Objectivity
Some people want to tell you that objective views are not possible. That doesn't make sense. Why would you have the standpoint that everything below 100% objectivity is 0% objectivity? Why should we not try to act and think as objective as possible to us? Sure our eyes are bound to our heads, so we are born with “egoistic view” just from our eyesight already if you want to see it that way. But our minds are capable of objectivity. The soul and spirit is not necessarily egoistic by nature. If you use your experience, reliable information in memory or try to get it, reasonability, and will you can build up objectivity. But the most important thing is to think about everybody, and not just yourself with actions and thoughts, to become more objective. Objective view can be trained. But you have to stay on it all the time, and question yourself on it.
More about the basic principles: 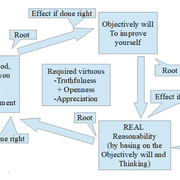 Please mind that every single element in the boxes goes theoretically from 0% to 100%
100% can't really be reached by humans, but you can go up very high.
=> Please mind, that that does NOT really mean “socialism economy” is the best answer. That would be interpreting this wrong if you think it means that. Rating every other human as “as important” as yourself, means give him the same chances and goodwill. But it doesn't mean that if he tries less hard, he has to profit the same amount.
What do I think of my basic principles as a solution?
I think they are one of the possible solutions, that could theoretically solve almost all problems in this world and beyond your life to some extent. That sounds like a lot, reasonably it can't be “completely perfect”. Basically just because of the amount of work everyone would have to put in individually.

UPDATE: Ok that one might be the most important one point of all.
Ok better solution?
Let's think about that systematically - To change for the better you need:
You need believe in God to get objective will
You need Goodwill to do it right (good works for everyone)
You need purpose to fire you on
You need important reason to not slack of
You need to know about the importance of advancing yourself to get happy

The only problems here are really "purpose finding" and the "reason not to slack off". Because the rest should be understandable logically.

One does find purpose, by finding his strengths and looking at how he can help society with it.
"Reason not to slack off": that's the difference between important and urgent. When something seems urgent, it's easier not to slack off.


Let's look at it a different way:
Currently many define their expansion physically... If your defining your expansion with your mind instead it'll better... Not saying we should get rid of physical advantages

But basically money itself is quite a problem really... Hm... Like a core problem somewhat... Against real happiness not for

But maybe either learn something or make yourself useful... And if the job gets boring advance/learn...
So basically just go from bad jobs to good jobs by advancing yourself...
Everybody gets the same access to things.
So basically you have to advance yourself to get great jobs
Education does the rest
Also since you cycle between jobs it means more challenging life more advancement
That would also solve the problem of high ranking people not having the right mindset. Since they went through the advancement.
It would also solve not doing the work you want for money.
And high ranking people in jobs actually being decent.

So basically go from unpopular jobs to popular by advancing yourself, also with education, everybody has the same access to physical things
But I'm like 95% sure that's the main answer.


Just look at following: What are the core ideas of socialism and capitalism? 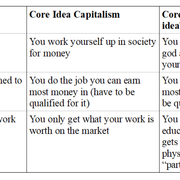 In a way, this no-Money idea is further away from socialism than capitalism is. “The life your dream” idea is much deeper rooted here. And more realistically possible to do.
The focus on the physical things is just not good and gives bad mindsets. Just look at some current developments, wars for oil, bankers in politics, financial crisis, everything can be bought from power to lives. Society always pays.
Like I already wrote, you need a important reason to not slack of to improve yourself as a person. And that can't be money. So it could just be your dream job you actually want to do.
Also the “spectrum” of things should get wider. Because people can make the things they dream of. Not so many ideas will die at the graveyard.


Of course the basic principle is still very much basic. I'll detail it more some other time.


The two main question are “what would that look like exactly” and “how could we develop there peacefully”.
For the “what” the biggest question would be what does “Everybody gets the same access to physical things as long as he “participates”” actually mean?

Basically that also means: “No going out shopping, just to buy some unnecessary things to have them”. Either things you need, or you have to bring extra effort individually. The attitude, to just buy unnecessary things to have them(because you are bored or something) is problematic to say the least. This works like a drug around the real problem without fixing it. When you actually want something unnecessary, you should have to do some effort for it. That way it should actually still work out. Since you get happy from the advancing yourself, and the amount of wasted materials and problems for the environment get limited more.


How to think, how to lead, how to drive, how to talk.... You'll have to face challenges, and master them. Just learning examples by heart is not enough, it'll only help to start with.


How do the people profit:
-happier lives from progressing more throughout
-fair distribution of things for everyone
-less war and danger
-people everywhere are going to be just better people
-you can life your dreams way easier


How does the environment profit:
-Way less wastage


How does the economy do?
-Probably good, just because the basic resource of success – the mind – gets optimized all over the place
-Mover diversity more people get to to their ideas, as well as less danger to it.
-In a way it still works out like in capitalism. Because things get a “rating of cost”. And people have to bring extra effort for it. Means there's a “demand” / “offer” system like in capitalism. Just lots of less wastage, less unfairness, less power shifting in wrong directions.
-For the absolutely necessary things, these should just get “planned”. Should work for those necessary things at least.


How do costly ideas get financed?
-By sort of “banks”, similar like now. You need to convince them of your ideas. But both win and loss is more to the society then.


How do Company's get effective economy wise in this?
-So how is managed how much material and personal a company can use?
Could be similar to capitalism probably for limiting it – since there's a demand / offer system. So basically it depends on the demand. But its more social still.

Help me think : is loneliness a problem ?

Who thinks this is true?

Unpopular opinion? : They need to ban women from tattoo parlors.
2 3 4