"How did you go bankrupt?" Bill asked.
"Two ways," Mike said. "Gradually, and then suddenly."

We are things that labor under the illusion of having a self. This accretion of sensory experience and feeling, programmed, with total assurance, that we’re each somebody. When, in fact, everybody’s nobody.

Any fool can be happy. It takes a man with real heart to make beauty out of the stuff that makes us weep.

“Keep a green tree in your heart, and perhaps a singing bird will come.” – Chinese proverb

Never give up control, live life on your own terms. One of these times, hell maybe even today, I'm gonna hear some bad news, but until then... who's in charge? Me... - Walter White

A small cloud may hide both sun and moon. ~ Danish Proverb
S

So, if you are too tired to speak, sit next to me because I, too, am fluent in silence. R. Arnold

It actually doesn’t take much to be considered a difficult woman. That’s why there are so many of us.” – Jane Goodall​

Lost in the Oilfield said:
lol.... here's some more these aren't really inspirational or anything necessarily... I love dumb quotes... they don't always reflect the person saying them... but they're still hilarious.

«I get to go to lots of overseas places, like Canada.»
- Britney Spears, on Blender Magazine (April 2004)

«The internet is a great way to get on the net.»
- Bob Dole, Republican presidential candidate


«What a waste it is to lose one's mind. Or not to have a mind is being very wasteful. How true that is.»
- Dan Quayle, former U.S. Vice President

«It isn't pollution that is hurting the environment, it's the impurities in our air and water that are doing it.»
- Dan Quayle, former U.S. Vice-President

«I've never had major knee surgery on any other part of my body.»
- Winston Bennett, University of Kentucky basketball forward.

«I've never really wanted to go to Japan. Simply because I don’t like eating fish. And I know that's very popular out there in Africa.»
— Britney Spears

(i didn't know Japan was in Africa )

«We're going to turn this team around 360 degrees.»
- Jason Kidd, upon his drafting to the Dallas Mavericks

«Food is an important part of a balanced diet.»
- Fran Lebowitz, US writer

(no, not just booze, drugs and cigarettes... its good to get a little food in there too )

«We've got to pause and ask ourselves: How much clean air do we need?»
- Lee Iacocca, Chairman of the Chrysler corporation

«For NASA, space is still a high priority.»
- Dan Quayle

«He's a guy who gets up at six o'clock in the morning regardless of what time it is.»
- Lou Duva, veteran boxing trainer

«If only faces could talk...»
- Pat Summerall, Sportscaster, during the Super Bowl

«I'm not anorexic. I'm from Texas. Are there people from Texas that are anorexic? I've never heard of one. And that includes me.»
— Jessica Simpson

(I love Bush quotes... nearly every word he utters is another comical quote)

«We are not ready for an unforeseen event that may or may not occur.»
- Dan Quayle, former U.S. Vice President

«Natural gas is hemispheric. I like to call it hemispheric in nature because it is a product that we can find in our neighborhoods.»
- George W Bush, Austin, Texas, Dec. 20, 2000

«I have opinions of my own --strong opinions-- but I don't always agree with them.»
- George Bush

«My sister's expecting a baby, and I don't know if I'm going to be an uncle or an aunt.»
- Chuck Nevitt, North Carolina State basketball player, explaining to Coach Jim Valvano why he appeared nervous at practice.
(hahahahaha... it almost seems unfair to pick on jocks though)

«And now the sequence of events in no particular order.»
- Dan Rather, television news anchor

«Whenever I watch TV and see those poor starving kids all over the world, I can't help but cry. I mean I'd love to be skinny like that but not with all those flies and death and stuff.»
- Mariah Carey, pop singer

«I'm so smart now. Everyone's always like 'take your top off'. Sorry, NO! They always want to get that money shot. I'm not stupid.»
- Paris Hilton (December 2003)

«It's nice, it gives you a feeling of security so that if something breaks we know we can always call a guy over and he'll bring a drill or something.»
- Brooke Shields, Actress, on why it was is good to live in a co-ed dormitory when she was in college

«Be sure and put some of those neutrons on it.»
- Mike Smith, Baseball pitcher, ordering a salad at a restaurant

«The word 'genius' isn't applicable in football. A genius is a guy like Norman Einstein.»
- Joe Theisman, quarterback and sports analyst

«I want to rush for 1,000 or 1,500 yards, whichever comes first.»
- George Rogers, NFL New Orleans Saint RB, when asked about the upcoming season

«I do not like this word "bomb." It is not a bomb. It is a device that is exploding.»
- Jacques le Blanc, French ambassador on nuclear weapons

«The doctors X-rayed my head and found nothing.»
- Dizzy Dean, explaining how he felt after being hit on the head by a ball in the 1934 World Series.

«I was in a no-win situation, so I'm glad that I won rather than lost.»
- Frank Bruno, Boxer
Click to expand...

That really made my day. Thx for that.

Body and soul - a horse, harnessed to an ox. (Georg Christoph Lichtenberg)

“To protect the sheep you gotta catch the wolf, and it takes a wolf to catch a wolf.” 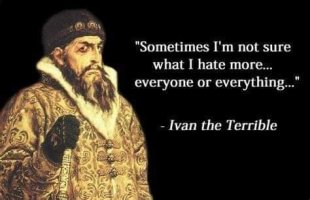 Why not both? lol

"The secret of life is honesty and fair dealing. If you can fake that, you've got it made."
-Groucho Marx

The bravest thing I ever did was continuing my life when I wanted to die.
O

“But the one thing they love more than a hero is to see a hero fail, fall, die trying. In spite of everything you've done for them, eventually they will hate you.”

Do not believe that you will reach your destination without leaving the shore. - Chinese Proverb

I have an important decision to make and I'm not sure what the correct answer is?

P
A special book about loneliness (in progress...)